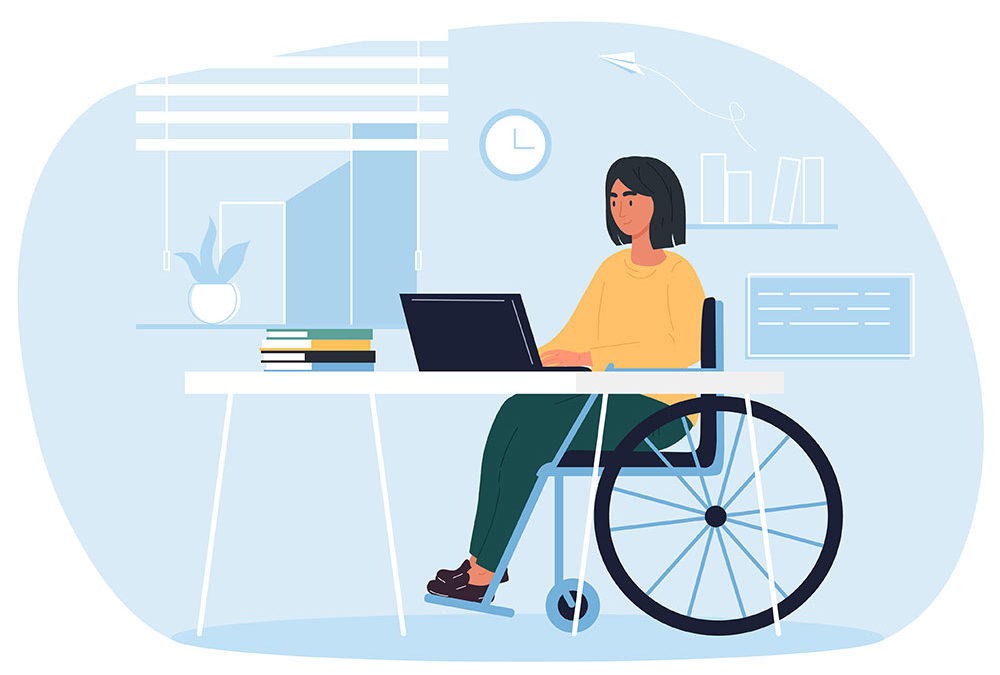 From September 16 through October 15, 2021, Capture Information Services Group (Capture ISG) administered our pilot participant satisfaction survey for a Florida-based non-profit Vocational Rehabilitation services provider. Since 2012, their teams have provided individuals with disabilities services designed to assist in gaining or maintaining employment and enhancing their independence. Capture sought the feedback from closed cases where the agency was unable to obtain and/or sustain employment for the participant. The goal of the project is to gain feedback about the agency’s services, willingness to recommend the agency, participants’ feedback as to why their case closed, and their willingness to use the agency again in the future. What we found was a highly responsive population eager to share their experiences and a potential return on investment over $500,000.

Capture ISG didn’t invent vocational rehabilitation customer satisfaction surveying. What we focused on is making our questions and process about the needs of the agencies and the participants themselves. Speaking with our vocational rehab liaison, it was noted that they never was once asked to solicit feedback from a participant concerning his own, or anyone’s performance in assisting them. We also found that when vendor partners provided information to the VRC to enable the participant to use informed choice in selecting an organization to work with, the participant had little information to go by. Wouldn’t it be great if the placement agencies who worked with VR had a tool to obtain satisfaction rates and other meaningful information?

Market Research For a Unique Market

Many of the research services used by VR services agencies and State Rehab Councils include hiring a market research company to send out an online or mail-in survey. Because these hired hands do not have a VR background, the questions are not specifically created with VR participants in mind and likely stop at just surface level data of scales or ratings. As Capture ISG often discusses with clients in other markets, this surface-level data doesn’t explain the root cause of the rating itself, and makes it less actionable. Often times, the survey is distributed only through online means, leaving a respectable portion of the population “uncounted” and not considered when the final report is written. There seemed to be little attempt to accommodate the differing needs for participation that the disability community naturally includes.

Another norm that we observed was the use of self-surveying through in-house resources and free tools. Many non-profits need survey data and appreciate the results but drown their efforts in waste by sending out a survey using Survey Monkey® or Google Forms. While the attractiveness of free is understandable, the data collected in these surveys are often not sufficient to gain any deep insights. Finally, self-guided surveys where the respondents are always filling out the form in itself are often doomed for failure. Respondents skip questions, answer them with wrong data, or misunderstand the question – if they answer at all. So while believing they are saving money on one end, they are losing it with time lost and lack of response. As result of these observations Capture’s team works with our clients to mitigate some of these factors. We work to stay within a reasonable budget. Obviously farmed-out research is going to be more expensive than zero, or close to zero-costs. But we want you to feel comfortable with the investment made and will seek to find the most reasonable cost with the best return on investment for you and your team. We will also work with you to ensure that your research project reflects upon you positively by using expert researchers who have been trained by VR professionals, thoughtful questions that are going to mean something to you and have an impact on your organization, and accommodating methodologies to ensure your participants can all share their story with you.

In September and October 2021, Capture ISG launched the pilot Closure Re-Connect study with our client. The agency provides services in fifty Florida Counties, serving thousands of VR participants through supported employment services, employment services, as well as adult and youth Work-Based Learning Experiences (WBLE), among others. Together the agency and Capture leadership worked together to fine-tune a questionnaire that measured five key performance areas and subtracted questions that created noise or risked questionnaire fatigue and reducing response rate. The resulting script provided a time efficient, but direct engagement whereby the most important elements of services provided to the pilot sample were asked. In the pilot, participants had opportunities to not only rate the given subject matter the questionnaire was measuring but also, when the question called for it, provided verbatim responses to get to the “why” behind the rating, giving the pilot’s results a depth of information that is not normally obtained with surveying this community.

“Unsuccessful” Does Not Mean “Without Success”; But May Mean Missed Opportunities

While the pilot sample population included only unsuccessful case closures, the actual placement success varied. 35.2% of the pilot population stated that the agency was successful in helping them find employment during their case. Assuming that each of these cases resulted in successful invoicing of benchmarks up to “Placement”, the remaining benchmarks that were not obtained have a potential value of $5,250.00 – $6,800.00 of revenue per case. Of those who reported being employed, 19% also stated that they were still employed at the time of the survey in the position the agency helped them obtain. This, all despite being closed Unsuccessful. On its face, this seemed counter-intuitive but the information obtained revealed that a factor or factors other than not achieving the Vocational Goal contributed to these closures. This survey was designed to get that agency the data they needed to find those areas of opportunity and learn from these missed opportunities.

A Closed Case, Not a Closed Door

While the survey was in field, a total of 53% of participants requested Capture ISG submit an electronic referral for services with the agency. Because there is no way to know if each of the 53% will be classified as an Employment Services Case or a Supported Employment Case, we estimate the potential value of these referrals to be from $364,000 – $546,000 resulting in this research yielding substantial return on investment. This translates to a significant amount of potential opportunity to make a second impression with these participants and increase the agency’s footprint in the disability and vocational rehabilitation community. Moreover, the Employment Specialists and staff in the field can focus on the bigger picture of securing employment for participants rather than referral generation.

Getting To The Why

Coding of open-end answers, often called “content analysis” is the process of reading all open-end answers and developing a list of “codes” based upon themes in the content. This baseline code list will allow for better overall trending analysis of themes that come up in open-end answers. For this pilot, all open end answers were read, themed, and coded to develop the findings as to what potentially caused cases to go from the road to success, to unsuccessful. When asking the participant to rate the agency’s performance, and following up with why they felt that way, the following key themes were found as reasons for their ratings:

When asking why the participant chose to stop working with the agency: 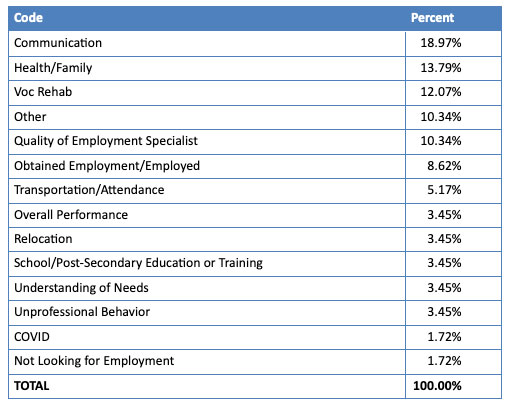 After review of these statistics and more, the agency’s representatives were not only pleased but “blown away” by the amount of data that was described as “going above and beyond”. Since the success of the pilot program, Capture ISG is proudly rolling out Closure Re-Connect to other vocational rehabilitation employment services agencies for their use. With our services, we believe the same level of research can result in potential returns on investment for all agencies; whether through the response analysis providing areas of strength and opportunities for improvement, or using the Re-Connect Referral to obtain an additional opportunity to work with the respondent, we believe that Closure Re-Connect can be the key to every VR agency. Contact us today for a free quote and to discuss Closure Re-Connect with Capture ISG’s team of research administrators. We look forward to hearing from you.